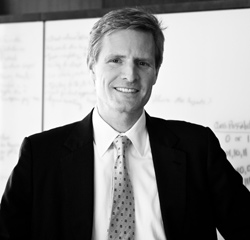 Graham is Global IP partner who counsels clients in a wide array of intellectual-property and technology-related matters. He represents clients in litigation in the district courts and before the U.S. International Trade Commission, as well as helping clients license their intellectual property without resorting to the courts. He also sells patents and trade secrets for his clients and, in one engagement, achieved possibly the highest per-family price ever paid in the industry ($37.5M/family). Graham also advises companies on patent strategy and financial firms considering investments in patent assets and patent enforcement.

As a result of his varied experience, Graham is often asked to speak on matters related to IP policy, including before the U.S. Congress, the U.S. Justice Department, and the Federal Trade Commission. He has served multiple times as an expert witness on matters involving patent enforcement and general monetization and is a frequent speaker, both at conferences and in the press, on IP issues. IAM Magazine recognized him on its list of the world's 300 leading IP strategists every year since 2012. He has been named one of the Top 100 Lawyers in Illinois and, for the last eleven years, designated as a Super Lawyer.

Immediately before joining Global IP, Graham served as Senior Counsel to the Deputy Attorney General at the U.S. Department of Justice. In that position, he vice-chaired the Justice Department’s Task Force on Intellectual Property and was appointed Deputy U.S. Coordinator for International Intellectual Property Enforcement, a body devoted to anti-piracy and anti-counterfeiting initiatives. He also managed a portfolio of technology-related and national-security issues for the Deputy Attorney General, including international data privacy regulation, computer forensics, information sharing, biometric data collection and management, and the Department’s participation in the Committee on Foreign Investment in the U.S. (CFIUS), the body that reviews foreign acquisitions of U.S. technology for national-security concerns. Graham held the U.S. government's highest level of security clearance. Finally, during his tenure, Graham was appointed Special Assistant U.S. Attorney in the District of Columbia and was lead counsel on multiple successful criminal jury trials.

Before that experience, Graham spent nine years in the Intellectual Property group at Kirkland & Ellis LLP, where he was a partner focused on IP litigation.

Click here for information about C. Graham Gerst in the Press and at Speaking Engagements