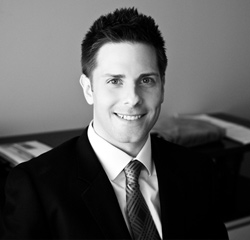 Alexander Debski is a Partner in the Chicago office, having joined Global IP in 2011.

Mr. Debski focuses his practice on all aspects of patent monetization and enforcement (including licensing, litigation, and sales), strategic counseling, and valuation services. His clients range in size from individual inventors and small start-ups, to large corporations.

Mr. Debski's efforts have resulted in patent divestitures and license transactions with large and small companies. As one example, Mr. Debski spearheaded the licensing effort for NeoMedia Technologies, Inc., securing over 100 agreements with respect to its intellectual property.

Mr. Debski represents clients in all phases of patent infringement litigation at the district court level, at the International Trade Commission, and in IPR proceedings at the PTAB, and provides due diligence and patent valuation counseling, including financial modeling and market analysis, as well as infringement, validity and damages opinions.

Before entering law school, Mr. Debski worked in the IT consulting industry for Accenture as part of a test team for software implementation. He also gained significant experience in the telecommunications industry as part of a product development team in Motorola's mobile devices division.