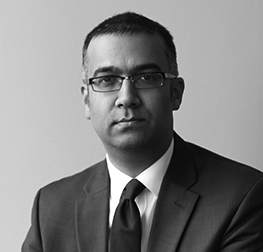 Jay Chandra is of counsel to Global IP Law Group. He is involved with all aspects of patent monetization, including assessing infringement, due diligence, and trial and appellate practice.

Previously, Mr. Chandra was a Staff Attorney of the Federal Public Defender for the Central District of Illinois where he represented indigent criminal defendants in federal court. He briefed a dozen direct appeals, argued three appeals before the Seventh Circuit, and argued dozens of contested hearings in district court.

Mr. Chandra holds a J.D. from University of Illinois College of Law. He was an articles editor for the University of Illinois Law Review, which published his note on inventorship disputes. Before law school, Mr. Chandra was Global IP's Chief Analyst. He assisted Global IP with due diligence in the Nortel Networks patent sale and Alcatel-Lucent secured debt financing among other engagements.

Mr. Chandra holds a Ph.D. in divinity from the University of Edinburgh, Scotland. He holds a B.A. in philosophy with a physics minor and an M.A. in theology from Wheaton College, Illinois. He is licensed to practice law in Illinois and the Central District of Illinois and before the Seventh Circuit.